HomeLe Petit PalaisHistory of the collections

History of the collections

The Petit Palais is inaugurated on 11 December as the "Palais des Beaux-Arts de la Ville de Paris". It presents the collections of paintings and sculptures acquired by the City of Paris since 1870 either as commissions or bought directly from artists or at Salons. This ensemble of French art from the late 19th and early 20th centuries constitutes one of the major poles of today's collection. 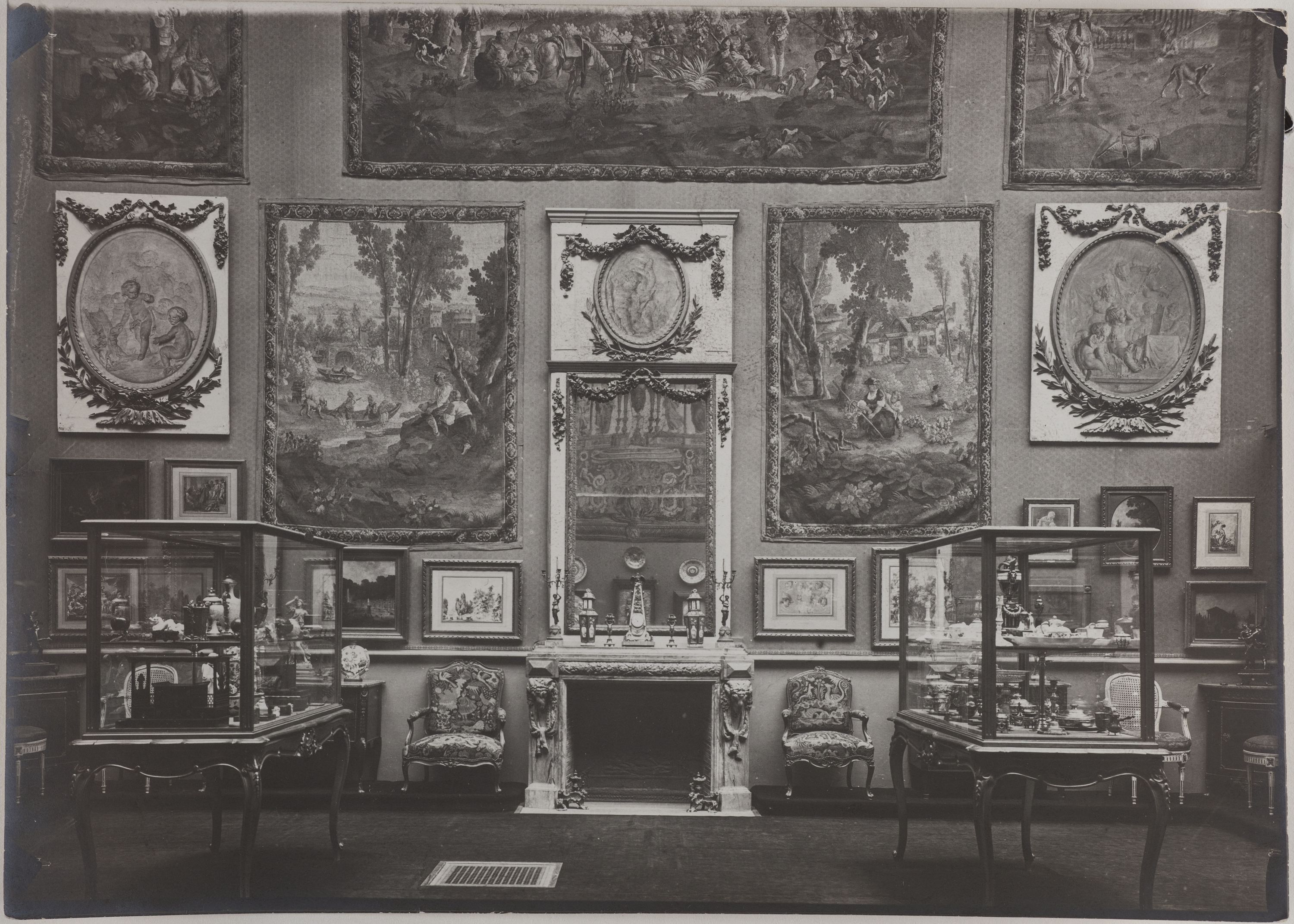 The second pole is formed by the collection of pre-modern art bequeathed in 1902 by the brothers Auguste and Eugène Dutuit, reflecting the 19th-century passion for   European history and its curiosity about other civilisations. Eugène (1807-1886) and Auguste (1812-1902) Dutuit received a classical education, which shaped their taste for arts. As adolescents, with their sister Héloïse (1810-1874), they decided to use the fortune from their father, a merchant, to put together a massive collection. Their bequest includes an impressive number of ancient (Greek and Roman) works, art objects from the Middle Ages and Renaissance, Flemish and Dutch paintings from the 17th century, manuscripts and books from the 15th to 17th century, with 12,000 engravings, including complete sets of Rembrandt, Dürer and Callot, as well as Islamic, Chinese, Japanese artworks. To this ensemble is added the fruit of the back interest (on the Parisian building also left by the Dutuits), which make it possible to regularly enrich the collection of pre-modern art.

1906 Donation of eight paintings by Gustave Courbet, from his sister Juliette.

1916 Jacques Zoubaloff donation of paintings and drawings by Redon and Harpignies, sculptures by Barye and Maillol and art objects by Husson and Cros. 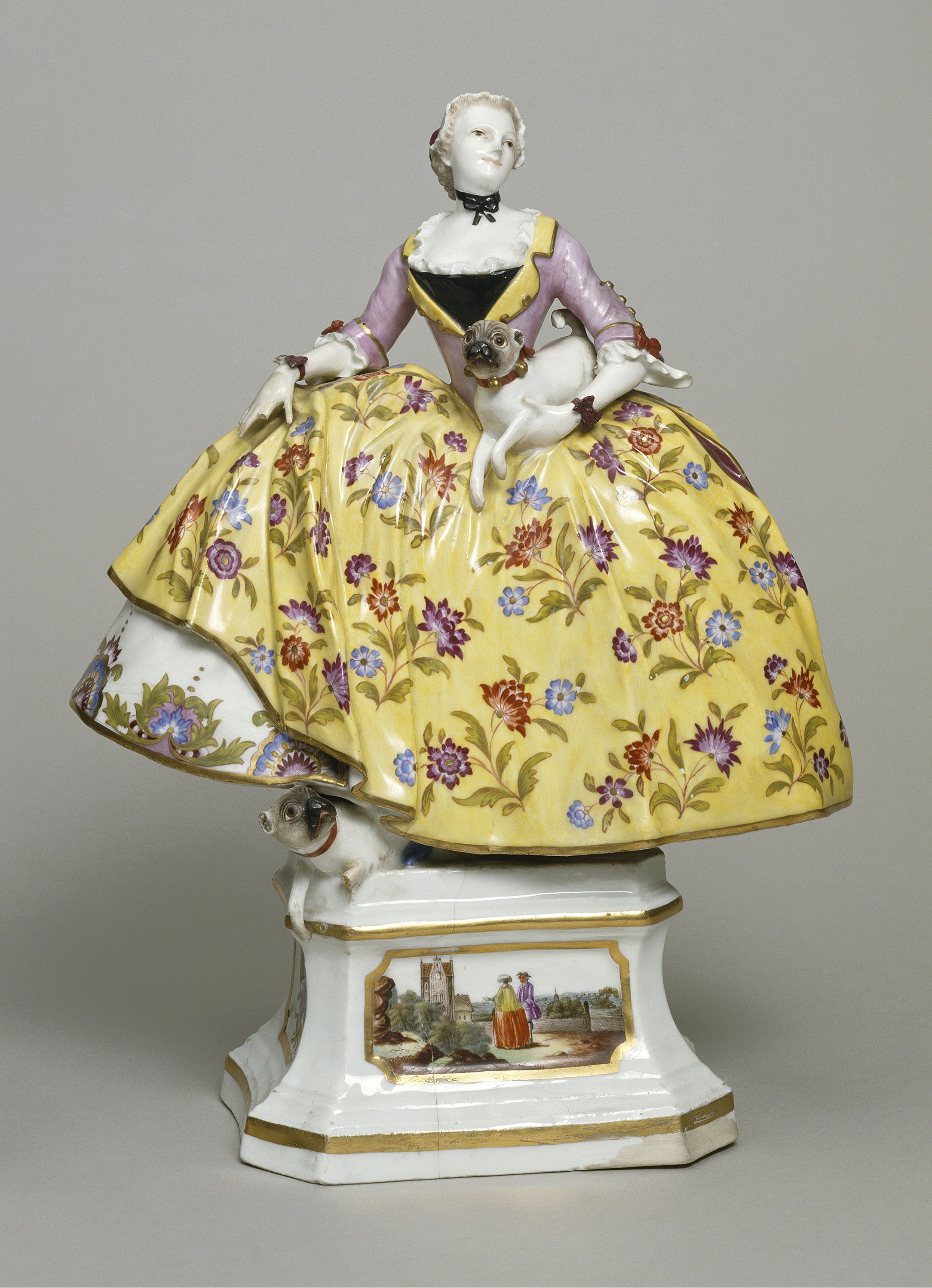 1921 Donation (subject to usufruct) of their collection by the American businessman Edward Tuck and his wife Julia Stell. Linving in France, the couple have constituted a collection devoted to all aspects of the 18th century : tableware (porcelain from China, Sèvres, Saxony), watches, English enamel, Meissen figurines, tapestries, furniture, sculpture and paintings. The collection is put on display in the museum in 1930.

1938 Donation of sculptures by Carpeaux, from his daughter.

1945 Bequest by Ambroise Vollard of paintings by Cézanne, Renoir and Bonnard.

1967 Donation by Jacques Soustiel of some twenty fragments of Carriès' Monumental Door.

1998 With the donation of the icons collected by Roger Cabal (mainly Greek and Russian, 15th to 18th century), the Petit Palais is now home for the biggest ensemble of icons in France.

Donation by the daughters of Charles Jacqueau, a designer for Louis Cartier, of several thousand drawings of jewellery.

1998-1999 Paul Landowski (1875-1961) is one of the most ubiquitous sculptors on the Parisian landscape (Saint Genevieve on the Pont de la Tournelle, Cain and his sons in the Tuileries Gardens, The fountains at the Porte de Saint-Cloud, etc.). On the occasion of an exhibition staged at the Petit Palais devoted to his major project the Temple of Man, his descendents donated two sculptures and approximately two hundred drawings in 1998 and 1999.

2001-2002 Georges Deraisme (1859-1932), an engraver for René Lalique was also an independent designer. In 2001 and 2002, his descendents made a highly significant contribution to the jewellery design collection at the Petit Palais with the gift of nearly eight hundred studies which are representative of the body of his work.

2002, 2004, 2007 and 2009 A collaborator with Alfred Roll on the monumental decoration of Paris City Hall, Ernest Renoux (1863-1932) was essentially an open-air painter. His daughter-in-law donated a sketchbook, paintings and tools which had belonged to this retiring artist. 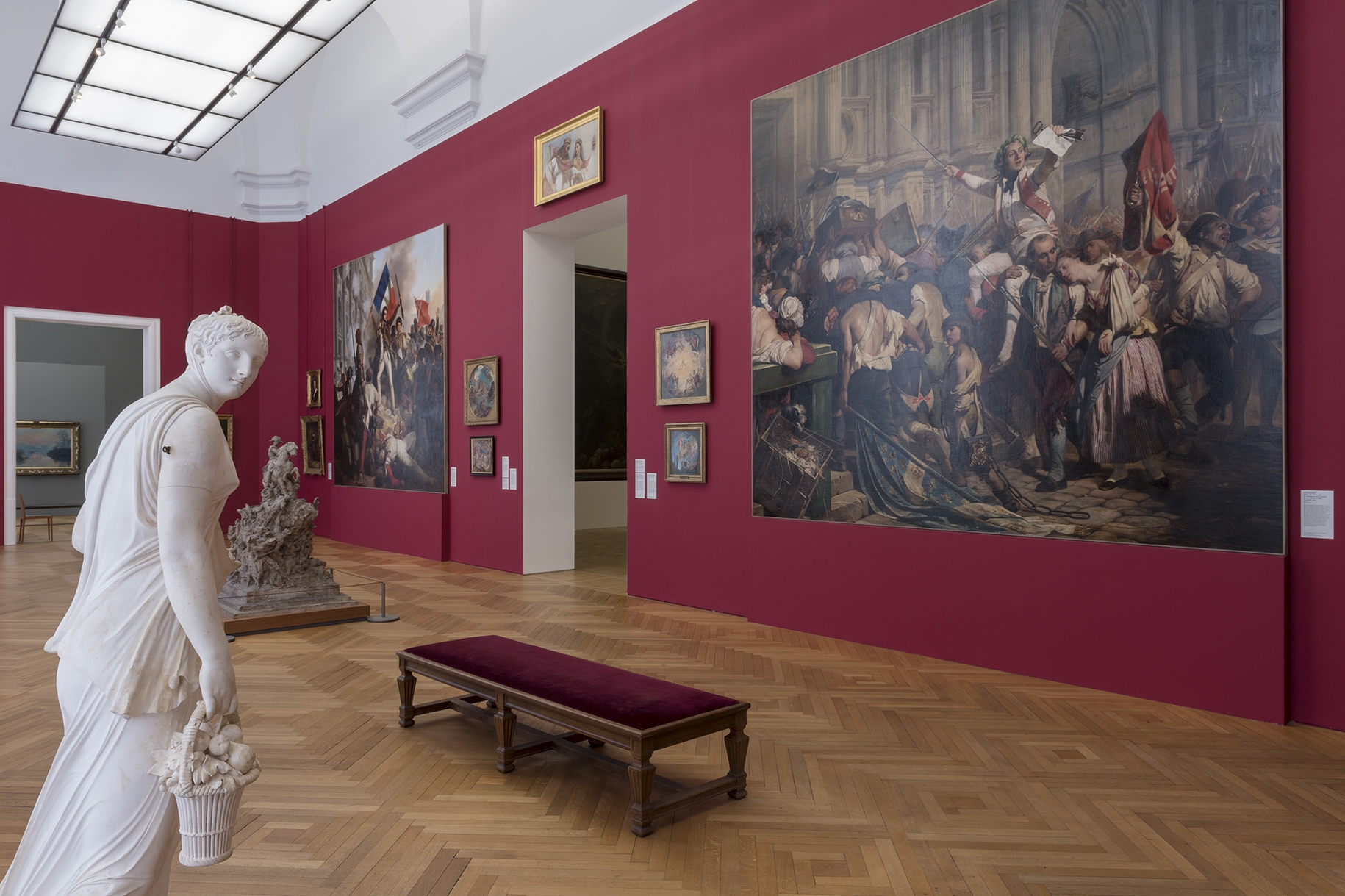 2015 The collections circuit was expanded with two new galleries, one devoted to the Romantic period, housing restored large-format works by Delaroche and Schnetz, alongside paintings by Ingres, Géricault, Delacroix and others, the second displaying decorative canvases by Maurice Denis, and works by Cézanne, Bonnard and Maillol.

Its programme of temporary exhibitions was redefined, seeking henceforth to provide a better understanding of the periods covered by its rich collections. In addition to the two main temporary exhibition spaces located on the ground and upper floors, special showings and themed exhibitions lead visitors into the permanent rooms. 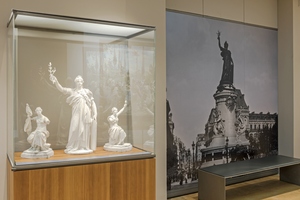 2017 The end of the year was marked by the inauguration of a new room devoted to Eastern Christian art, bringing together for the first time under one roof the remarkable collection of icons assembled by Roger Cabal and donated to the museum in 1998, and the Byzantine artworks which came to the museum in 1902 thanks to the bequest of the Dutuit brothers.

In parallel, display cases previously occupied by icons were repurposed to present a selection of draft paintings and sculptures, used in preparation for the grand decorations and public monuments commissioned by the City of Paris at the end of the 19th century. 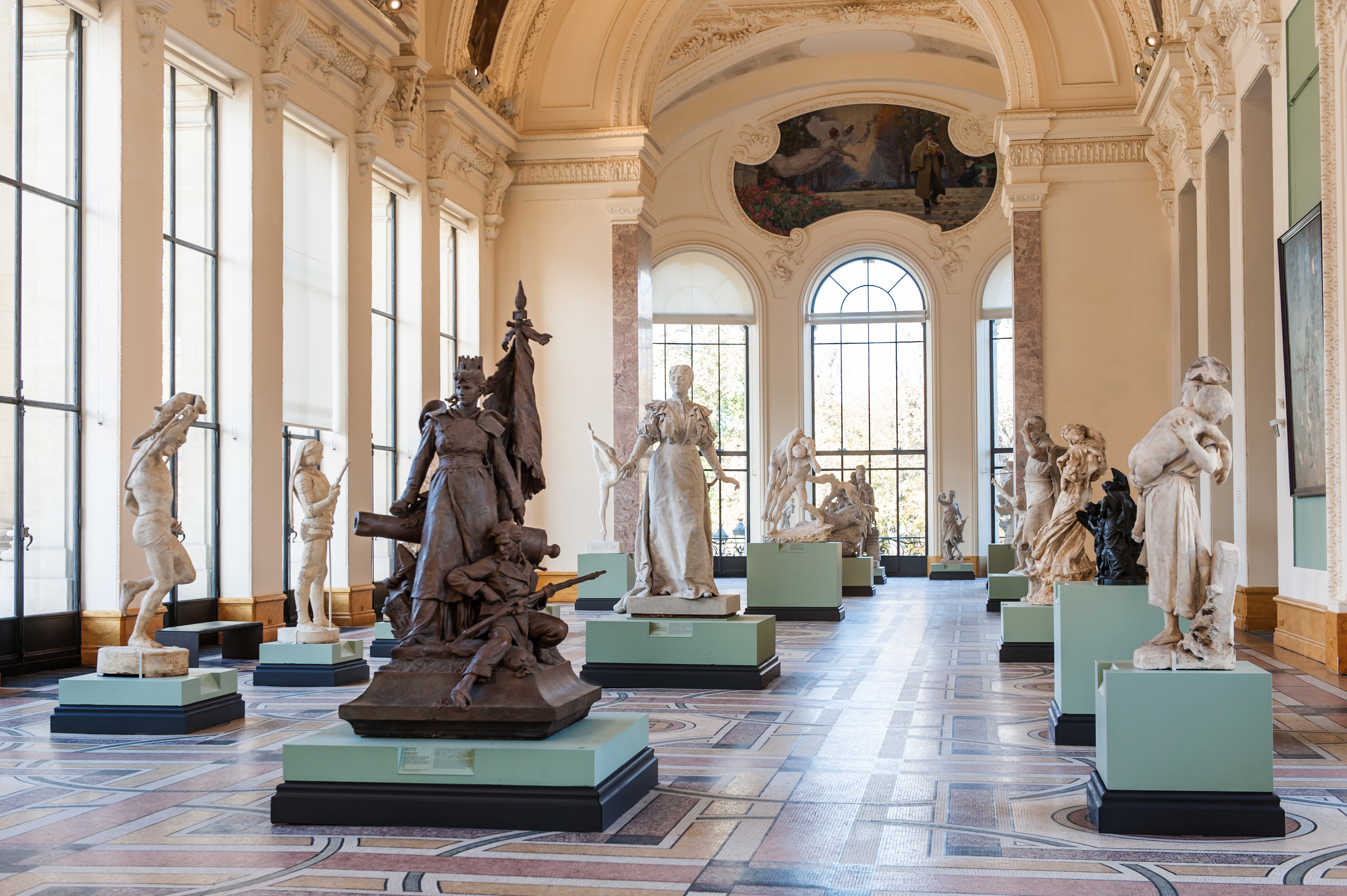 2018 The Petit Palais inaugurated its new sculpture gallery, thereby enabling the large north gallery to return to the purpose it originally held when the museum opened in 1900. Thirty-one sculptures sourced from the museum’s collections as well as from COARC (the body responsible for conservation of religious and civil artworks belonging to the City of Paris) allow the public to discover and better understand 19th century statuary. The selection of sculptures presented in this new gallery reflects the exuberance and proliferation of styles in the late 19th century. Included are imposing effigies sculpted by Ernest Barrias, Auguste Bartholdi and David d’Angers, as well as lesser known and even previously unseen works, typical of the sculpture of the 1900s, such as Monnaie de Singe by François Rolard or La Danse de Bébé by Paul Roussel.

A colloquium entitled “Choosing Paris: Major Donations to the Museums of the City of Paris”, organised on 11-12 October 2013 by Paris Musées and the Institut National d'Histoire de l'Art (INHA), paid homage to the Dutuit brothers, the great donors of antique art to the Petit Palais, as well as to the sculptors (and their relatives) who generously responded to the appeal for donations made by Henry Lapauze, director of the Petit Palais from 1905 to 1925, in order to develop and diversify the museum’s collections.